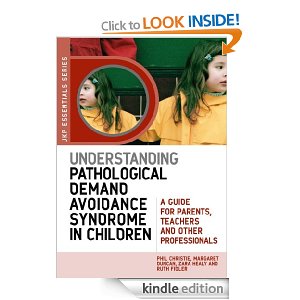 I went to a conference on behavioral problems in children with epilepsy about a month ago. Put on by the National Centre for Young People with Epilepsy (www.youngepilepsy.org.uk), I was the lone parent at this one day event for doctors, specialist nurses, social workers and educators. I was darn lucky that I hold a degree in health or I would have been lost with the fifty cent words flying about.

Before the event, I was going over the program and noticed something I was not familiar with…Pathological Demand Avoidance Syndrome or PDA. I googled it and read enough to realize that many of the characteristics fit my daughter’s behavior patterns. So the next step for me is always to hop onto Amazon and see if I can find a book on a subject. I did…Understanding Pathological Demand Avoidance Syndrome in Children by Phil Christie, Margaret Duncan, Zara Healy and Ruth Fidler (for simplicities sake from now on I will simply say Christie et al).

To begin with what is PDA? First of all, it is another one of those ‘new’ discoveries of psychology. First documented over two decades ago by Elizabeth Newson at the University of Nottingham, it is considered a ‘pervasive developmental delay’ and is related to the autistic spectrum disorders (ASD), but varies significantly from most other syndromes on the spectrum. It is unlike other ASD the children with PDA appear to understand emotions and communication…to the point of being manipulative.

These children do not recognize that they are children. And while they may fully understand the societal rules of behavior, they have difficulty applying those standards to themselves. Their deep need to control situations and their environment is born out of the intense anxiety that they experience when demands are placed upon them…even normal every day demands of life and school.

For a scientific work, I found this book extremely readable.  The advice on how to best manage these disruptive behaviors was practical and thorough. Suggestions such as using games or challenges instead of demands have made our home an easier place to live. Also, the idea of giving children more choice/control while it may go against much of the traditional parenting advice works very well for these children; something I had discovered naturally.

For instance, in our home taking our medicines each night is fraught with anxiety, resulting in battles several times each week. After reading this book, I adopted a different approach. Now instead of saying, ‘it is time to take your medicine,’ I prepare the medicines and bring them into the room. I show them to Emily and ask ‘when would you like to take your medicine.’ She usually replies, ‘after this show’ or something specific event. Does it work all the time? No, sometimes she will try to get out of what she said. But instead of fighting, I offer compromises or remind her of the importance of keeping her promises, which usually get the desired result without a war of wills ensuing.

Another great point with this book was the inclusion of homeschooling as an option in the chapter on education. I will say that the initial portrayal of home education as a ‘last resort’ was disheartening but at least it was included along with this…”It is the flexibility of educating at home which may suit a child or young person with PDA, who may not be able to follow the rigid approach and curriculum which is in place in many mainstream environments.”

I should also say that this book is fairly pessimistic about the long term outcomes for PDA. But this is perhaps unfair because they base these assumptions on a very small sample of children that Dr. Newson followed into adulthood (less than four dozen). Many of these young people ended up dropping out of education, unemployed and often in trouble with the law. But I would also point out that because little was known about this syndrome when these children were diagnosed, they did not have benefit of many of the interventions recommended in the text.

In the end, this is a book and a diagnosis that I will keep on the shelf to refer to from time to time. I hate to be so negative, but I am left wondering what the value of this label is? Since many of these children already have an array of alphabet soups such as ADHD and oppositional deviant, why would one more matter? Especially given the lack of acceptance of this ‘new syndrome’ among the scientific community. So while I cling tightly to the new skills of offering choices and using games/challenges rather than demands, the term itself holds little cache for me.

Overall, if you feel that your child has strong elements of autism, but just does not fit labels like Asperger’s, if others view your child as demanding, if every single demand you make of your child can easily escalate to a battle of wills, then I think you can gain a lot from reading Understanding Pathological Demand Avoidance by Christie et al.

But don’t take it as gospel. There is much these experts don’t know about this syndrome and especially about your child. Once upon a time, in another life, long long ago, I knew this preacher who said that for some things/ideas you needed to spit and chew. Chew and digest the parts that you can use and spit out the rest. That would be my advice on this book…and this syndrome.

On Friday, I will have a guest blogger. Sharon has been ‘unschooling’ her son with autism for six years. Her response to an inquiry on one of the online groups that I follow was so inspiring that I wanted to share it with you. Then next Friday, we take a more traditional look at approaches to managing ADHD with Dr. Sabrina Dosani’s Calm Your Hyperactive Child.