I got into another Twitter debate last night. This one over an article supported by NAS and the BBC about the lack of support for families with violent #autistic young humans.

Let me begin this blog with this statement…

It is not that I do not have sympathy for this situation. It is that that sympathy is with the #ActuallyAutistic human rather than the parent/carers/family.

I think that some people find that both shocking and offensive since I am a parent who is supposedly ‘normal’.

The other thing that I get is…yes, but everyone’s autism is different. Maybe your daughter’s is not like theirs.

In other words…you don’t know what these families are going through. Your child is not #autistic enough.

The truth is that I very much do know. Pankwake has a subtype of autism called Pathological Demand Avoidance (PDA) but I renamed it Pretty Damned Awesome. Nonetheless, one of PDA’s markers is extreme mood lability. In other words, it is the best day ever. Followed five minutes later with a violent meltdown with screaming, kicking, cussing, and biting.

So don’t you dare tell me I don’t know what these people are going through.

Been there, done that, and have the t-shirt…or in this case a scar or two to prove it.

And we got ‘help’. You know what? The more I did what the ‘experts’ suggested…set firm boundaries, put her toys out of sight (it is too stimulating for an autistic child), keep to a schedule. The more I did those things…the worse PanKwake’s behaviors became.

You know what DOES WORK?

You see there are two types of meltdowns… 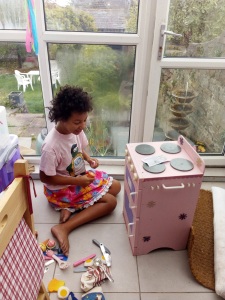 Let me give you examples of that last one. With PanKwake, our current dilemma is hygiene. Since she was a tiny, she screamed and yelled anytime anyone touched her hair. When she was very little, there was a cousin that could with a bag of sweets get her to sit down to have it braided. But she adored that young woman. When she began nursery and then school of course, it was a full on battle royale to comb those beautiful curls each morning. Then her seizure meds made her hair grow brittle and begin to fall out. Combing became even more difficult. But at least I could still get her to let me wash it. Not anymore. This is her wild hair now.

Yes…I am sure that when we go out some people think me a bad mother for not doing something with that child’s hair. But for me…

My child’s mental health is more important than a hair brush!

Mental health? Come on, aren’t you being dramatic?

Am I? Let me ask you…if someone held you down and did something that physically hurt you, if they refused to listen to your pleas until they were satisfied…how would you feel? And if that was repeated daily? What would happen to your sense of safety? Your self-confidence? Your very identity?

There are others too, of course. Going in cars and taxis is troublesome for PanKwake. This person who can do the wildest rides at amusement parks gets motion sickness on trains, busses, and in cars. She has only so much tolerance. So we are always limited by geography with the #HomeEd group activities we can attend. Even then I get looks from the other Moms when I walk almost two miles home, the final bit of it up very steep hills. I am sure that some of them feel/think that I spoil my child…that she should just be made to do it. Thankfully in our #HomeEd community people respect one another enough to keep their opinions to themselves.

I could feel this whole weeks blog with other examples…and how we strive to UNDERSTAND and ACCOMMODATE PanKwake’s needs.

You know what? It works. As I write this, I cannot remember her last meltdown. I do remember that it lasted less than 15 minutes. There was no true violence.

Yes, we still occasionally get bad ones. We still keep knives on the top shelf in the pantry instead of in easy reach in kitchen drawers. We have bolt locks on the doors and windows to prevent her from running. Though we hope to soon find her dog that can be trained to protect her. Then we can give her the same freedom of other teens to storm out of the house and go for a walk to cool down when the parents are too annoying.

You see that is what bothers me most about this article…it demonizes our autistic humans. There are already so many myths out there about autism…no imagination, no empathy, etc. We do not need them seen by the public as violent as well.

As I told this Twitter person…the parallel is schizophrenia. A very small percentage of schizophrenics are violent. Less than 1% actually. That is actually lower than the general population. But a couple of high profile murder cases led to the perception that they were dangerous. As a result, until very recently as a group, they were sectioned/involuntarily committed. They had strong, mind-altering drugs with horrendous side-effects FORCED on them without their consent. Because of course everyone…’experts’ included…knew that schizophrenics were a danger to themselves and others.

So, yes, while I do understand better than most what these parents are facing, I worry more about the human rights of their humans…and the whole #Autistic community.

I do believe there is a better way. A way that respects and validates the human rights of our little humans. That puts their needs above our own. That realistically weighs the cost of societal expectations against their right to just be.

I even admit…I will not rule out the possibility of restraining PanKwake as we have had to do in the past. But that is a LAST resort…to prevent her from harming herself. Only in truly life-threatening situations though.

You know what…when we stopped pushing those buttons of hers…not only did those meltdowns stop but the inevitable sensory ones became less violent too. So, while I will not sit here and say…never…I do not believe it will come to that again.

What would I say then to those families?

The same that I say to all families. The key is…

Understanding – What causes your child to meltdown? Is baths/neat hair/that shop or appointment REALLY worth it? Then ask yourself this questions…what’s it gonna hurt REALLY?

Acceptance – If you know that meltdowns are inevitable then it really is easier to manage them. Prepare for them mentally and physically. Even now my knives are up and both Cookie Monster and I are prepared to lock the doors and windows to keep PanKwake safe.

Unconditional Love – During and After. Do not expect apologies. Do not try to rehash it. Your child had no control so discipline and consequences will not work as with other little humans. But your child intensely NEEDS your love the most then because as scared as you were…they have scared themselves even more. They are afraid that you won’t love them anymore. PanKwake is always neediest right after a meltdown. She needs mine and Cookie’s attention. She NEEDS to know that we still love her.

Laughter – Yes, laughter. See the funny in all situations. There is a saying…Sometimes you have to laugh or you will cry. Laugh instead. Whenever possible. Cry if you must…but not in front of your little human. They need to see you as their rock. And after those tears…LAUGH! #HomeCrazzyHome is full of it…even at 3 a.m. when PanKwake wakes me up for water…for the 4th or 5th time that night.

Yes, this is a life of sacrifice…but they are so worth it. With time to heal from all those past hurts and maturity, you will find that those meltdowns…especially the worst, violent ones…decrease. Then like me…one day you will wake and realize that you cannot remember the last really bad one.

Your life won’t be what other parents’ are. But it will be easier than it once was. And you will realize too that you have become the… 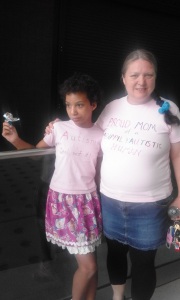 I made a t-shirt that actually says just that. I wear it sometimes when we go out…just in case we do have one of those rare public meltdowns.

That is what I wish for those parents…and most especially their young humans.

2 thoughts on “Autism & Violence – The Truth”