Never have I believed those words more than this morning. I sit in my study, looking out my window, and despite a less than ideal night’s sleep I feel refreshed and renewed. The house is completely quiet. Cookie Monster, PanKwake, and even Ernie are still sleeping. It is just me and you…

People always say that they need a vacation to get over their vacations. And nothing is more true. Especially when you factor in #neurodivergent #autism and #PDA (Pathological Demand Avoidance).

But I have to admit…PanKwake did beautifully. Not a single meltdown. And that is HUGE considering just nine months ago when we last went to London, she had meltdowns on the train going and coming.

Was she ‘normal’…the ideal child…perfectly quiet, still, and behaved? H-e-double hockey sticks, NO! But we don’t expect her to be.

But she has come so far in such a short time period. Especially when it comes to self-regulation…and travel.

One of PanKwake’s vestibular disregulations is motion sickness. The same #LittleHuman that can ride the wildest roller coaster out there cannot manage more than five minutes in a car, bus, or train without feeling ill. It has been one of the things that most limit our activities. 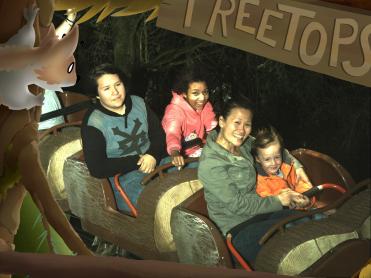 We had noticed though that PanKwake was taking more responsibility for her choices when it comes to travel. More than once in the past few months, she has ASKED for a taxi or bus rather than endure a long walk home…especially in the rain or cold.

But this holiday was the ultimate test of that…and just how ready she was to attempt DisneyLand Paris. And she passed.

At least as far as we are concerned. The people around us on the train might think otherwise, but screw them. We do not sit in the quiet coach. So if she plays her games on the iPad, her music, sings, or talks too much or too loudly…get up and move. And some people did. But that was okay.

That may seem harsh to some of you. But we have always taken the stance of greatest need comes first. In other words…why does society expect the #neurodivergent to change to be more like them…i.e. ‘normal’? It is not the #autistic who lack empathy…it is society. And we refuse to bend to those standards needlessly.

Needlessly. That is the key. I did once ask PanKwake to turn her volume down. There was a baby a few seats up from us and he was trying to get to sleep. In that case, that one instance, his needs outweighed hers. That is the rule we live by.

But this time…seven hours plus on a train, numerous bus and taxi rides…PanKwake was amazing at self-regulating. She did beautifully at monitoring her sensory needs, communicating her limits, and self-soothing. I shared with you yesterday these kawaii art photos that she made of Cookie Monster on our trips as one way of self-soothing.

But there were others too. She has always used her sensory toys. We took her favorite duck. But she was so stressed on the way down that she broke it. So we bought her others as souvenirs at the zoo and aquarium. She used those too.

She also made the decision herself to have two quiet days. Down time. Where she slept in and just relaxed at the hotel. This in itself is huge. There are some adults, #neurodivergent and neurotypical, who cannot or do not know when they have reached their limits.

So, you may be asking…what does any of that have to do with #HomeEd or #RadiCoolUnschooling?

Everything! Especially when you are #neurodivergent like PanKwake. Remember this definition of ‘suitable education’ from last week’s series on #HomeEdLaw…

“primarily equips a child for life within the community of which he is a member, rather than the way of life in the country as a whole, as long as it does not foreclose the child’s options in later years to adopt some other form of life if he wishes to do so”.

A suitable education’s primary purpose is to EQUIP a child for life within the community.

While Kirsty Williams, Secretary of Education for Wales, may prattle on uninformed about literacy and numeracy for the #neurodivergent none of that matters IF you do NOT have life skills.

When I took PanKwake out of school all those years ago, I had one goal in mind…to give her the best possible chance at reaching her full potential. For us that meant education has focused on things that most people take for granted like…

Most #LittleHumans develop those skills sometime after the ‘terrible twos’. As Dr Ross Greene says in his book, The Explosive Child, ‘children do well when they can.’ They are born with the need to please. If you are not familiar with Dr Greene or his ‘collaborative problem solving’ approach to parenting, you should. Most of the information is on his website…FREE. And besides I just noticed, the Kindle edition of his book is less than two quid. Buy it! Read it. It was one of my early resources for managing PanKwake’s challenges. The second part of Dr Greene’s theory is that behaviors are a result of what he terms…lagging skills.

In other words, some #LittleHumans CANNOT just internalize how to please adults. As with PanKwake’s behavior on the train, it was not that she did not know what was expected of her. She just could not do it. She needed her music, singing, and loud talking to balance out the sensory overload of the noise around her.

I first noticed this trend when she began to squeal loudly each time an ambulance or police car passed with a siren on. Her squeal was as loud or louder than the sirens. But because she had control of the noise, she could balance them out or negate them. She rarely does this anymore…except on this trip to London where there were lots more sirens than at home.

It may not seem like ‘suitable education’ to focus on such things. But let me ask you…what good is any education if you cannot leave your home or even manage to communicate online because of your sensory issues?

Too many times I have heard parents of #ActuallyAutistic young adults complain that once their child left education all they did was lock themselves in their bedrooms and never come out.

They failed to understand that for eleven, twelve, or more years their #LittleHumans had not been given any choice, any control over their environments, and their sensory needs were not truly accommodated for. Oh, sure, maybe they could read, write, and do maths (but honestly there was no guarantee of even that). But they did not have the most basic of LIFE SKILLS. They had not been ‘equipped for life.’

We have a family friend who left her job as head teacher at a special school because she recognized that the focus on National Curriculum meant that she could not do that job. She could no longer focus upon the most basic of skills necessary to equip these children and young people to live in the ‘real’ world. Instead she was mandated to teach them to pass a test that they had little to no chance of passing.

And that, folks, is why LIFE SKILLS are the very foundations of #RadiCoolUnschooling your #neurodivergent #LittleHuman. And this trip to London demonstrates just how effective that education has been for PanKwake. Where even taking a train to London is a huge success. 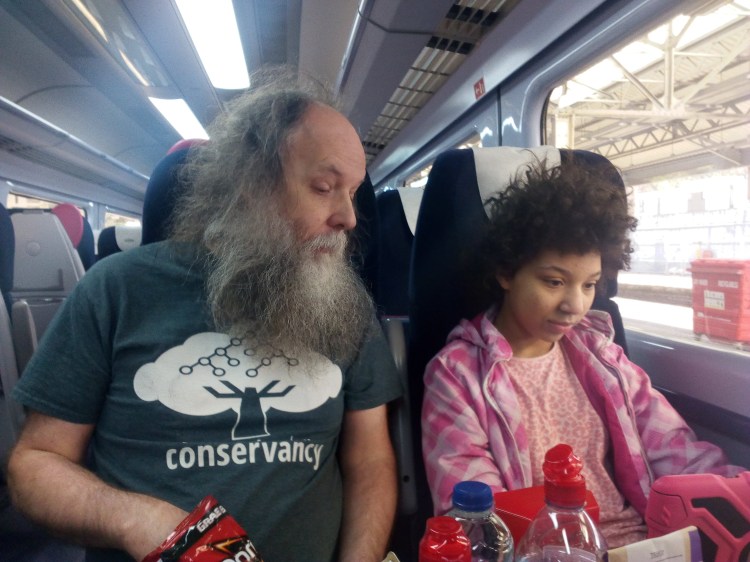