After the zoo, we were off to another of PanKwake’s favorite old London haunts…the Aquarium. 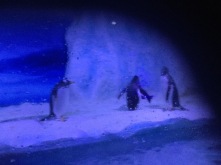 One of the banes of my existence on this holiday was that we kept running into school groups. To listen to the teachers and the disrespectful manner in which they spoke to and dealt with #LittleHumans was painful. It is no surprise then that those ‘children’ were more zombie than learners.

That, folks, is natural curiosity. Dr Peter Gray gets it so right in his book Free to Learn. This blog is a sample of his theories that along with those of Sugata Mitra form the crux of #RadiCoolUnschooling for #neurodivergent #LittleHumans.

All of those are big ticks for PanKwake.

But the fun and learning did not end with the Aquarium. No, we were off to the London Eye.

Now PanKwake’s alter ego PranKwake loves nothing more than torturing Mommy with wild and crazzy rides. Because while she may be a sensory seeker. Always wanting higher, faster, more, More…MORE. Mommy is most definitely sensory averse (well…with one exception but that is another blog all together).

So nothing would do her except PranKwake get Mommy on the London Eye. She began with…So what would it take to get you on it? I felt safe answering…If Cookie Monster goes on it then I will too. You see Cookie too is sensory averse, especially heights. Or so I thought. Come to find out…as long as he is enclosed he is perfectly fine with it. So I was stuck.

Here is the PranKwake video of the experience…

It may look pretty calm…normal even. Especially considering I am usually screaming my head off on these things. Except for one thing. The Eye goes incredibly slow…close to half an hour. I knew I could not scream for that long. I would not only lose my voice but wreck the rest of the holiday.

So instead, I did what I rarely do anymore. I internalized it all. I masked. I basically had an half hour long panic attack.

And to make matters even worse…Ernie…our au pair is a gymnast. Her gymnastics club back home in Germany have this standing joke…taking photographs of hand stands in unusual places. Like the very top of the London Eye.

So here I am wondering…is this going to topple us? Am I going to die? Thankfully, not.

If the snow had not gotten the ground so cold, wet, and muddy, I would have most certainly dropped to my knees and kissed it.

But the adventure was not over yet…

It was off to Hamley’s and Build-a-Bear Workshop there. PanKwake made…

Three buses and a couple of hours later, we were back to the hotel. The big people were exhausted but the #LittleHuman still had hours of energy left inside of her.

And that was just Day Three of our London Mis-adventure in #RadiCoolUnschooling.