Yesterday was one of those credit card commercials…

Food & Rides – WAYYYYYY too much 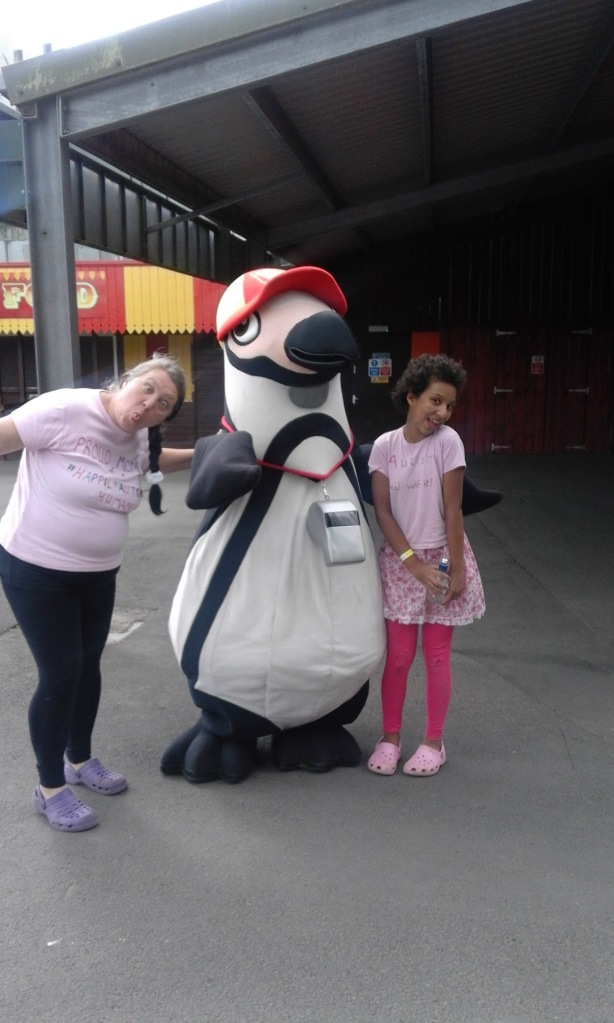 It was truly one of the best days…ever!

A huge THANK YOU to…

Did I mention that we managed two trains, a full day of rides and fun, and souvenir shopping…without a single meltdown?

She slept in her Maclaren Major special needs buggy about half the way there. I was a bit concerned when she woke up with 45 minutes more to go on the train. But she chatted with Mog, played on the iPad, and looked out the window.

Oh, and once we got to the station…SHE made the decision to take a taxi to the park. Instead of a bus which is her usual choice in that situation.

We were one of the first of our group there. We had over half an hour to wait. But she was content to play tag and hide-n-seek with Mog and the other children from our home ed group as they arrived.

Another huge THANK YOU to the Folly Farm staff for allowing us to go into the gift shop BEFORE our group fully arrived and collected the tickets. Buying souvenirs first thing…before all the excitement of the park…and before she gets tired and sensory overload sets it….makes ALL the difference. (HINT: given what I see with neurotypical children and parents at the end of the day, I think this is a strategy that others should use. But then the stores would be crowded for us.) She is getting much better at making her choices quickly with a minimum of anxiety too.

Then it was off…to go cart races with Mog…and photos with Mom and giant penguins. And all the other rides and games. Oh, I got ‘saucy’ on the antique Love Forecast that we played in the arcade. PanKwake was bashful. Home ed moment when she asked what that meant and I explained it was an old-fashioned word for shy.

And when Mog has the chance to send it to me, I will be posting another video to our YouTube channel…this one of me on the ferris wheel. Evidently you could hear me screaming all over the park. Mog says that I was calling out to deities that she had never even heard of. Did I ever mention how much I HATE amusement park rides? And heights? PanKwake gets such pleasure from torturing me with them (within limits).

Honestly, Folly Farm was spectacular. Enough stuff to do…farm animals, a zoo, rides and adventure playgrounds. But not the long lines (during term time any way) associated with most amusement parks. And the prices were reasonable too. I would highly recommend this one as a day out with your child…neurodivergent or neurotypical.

When it came time to leave….always a hard one…PanKwake wanted to do a couple more rides which we just managed to squeeze in. Then she got a bit upset that she could not check on the ‘pregnant’ pig we had seen earlier. But we were able to ask a nice young women about it. Only to discover that pig was not pregnant at all. She was just THAT big. I felt like a size zero model in comparison.

We had to walk back through the gift shop to the exit. And PanKwake was great. So great in fact that I sent Mog back for the giant pig head on a stick inflatable that had been the one thing I asked PanKwake to put back earlier. She deserved a reward.

Then we were off. We debated the best exit strategy. PanKwake said she could not manage another taxi ride…and I R-E-S-P-E-C-T her sensory needs like that. That left a bus or walking back to the train station. We checked but the next bus was not for almost another hour. So we decided to walk it. Good choice to as 1) PanKwake fell asleep in her buggy less than 5 minutes later and 2) we would have missed that train and had to wait two more hours for the next one.

With me and Mog taking turns pushing…mostly pulling downhill to keep the buggy from rolling off on its own…we made it with five minutes to spare. Then had to wait as the train was late.

PanKwake was out like a light. She woke only once to go to the loo. But she fell right back to sleep. Even through the taxi ride from the Swansea train station home…and me transferring her from the buggy to the couch in the family room.

She woke around 11 last night and came up to her room. She got me up around 3 a.m. to complain that her tummy felt funny. She said it would not let her get back to sleep. But it must have because she did not call me again…and she is still asleep now. Seven hours later.

I know that the next couple of days will be rougher…perhaps even a meltdown or two. I mean the Laws of Physics and autism say…

That which goes up, must come down.

And PanKwake has not yet perfected the art of soft landings. But yesterday proves she is getting there. That she held it all together…heck, some of the neurotypical kids were melting down by the end of the day.

I am so proud of her. So glad that we home educate…and have such a wonderful support network as our home ed group. I am more convinced than ever that my #HappilyAutistic child will grow up to be a productive, beautiful, complete, and #HappilyAutistic woman.

So yes…all that money…a day without Cookie Monster at my side (a rarity in itself)…the time, energy, thought that went into planning and organizing our trip…the physical exertion of walking all over the park and sometimes even pushing her buggy with my rheumatoid arthritis…ALL of it was so worth giving my child this special day.

You can do anything you want to do!

As I have told her, WHEN she can get to the point that she can tolerate the trains and busses to and from the park with just me and her…I will buy the annual pass and take her almost every month. Folly Farm truly is THAT good.

No day is perfect…but yesterday was darn close!

For PanKwake…and me as a Mom.