The other night I went on an adventure…at 1 a.m. I ended up all the way across town at ASDA at 1:30 in the morning…looking for bagels.

You see food has ALWAYS been a hot spot with PanKwake. When she was younger, we made a American style food pyramid and did cut outs of her foods. There were only about three dozen ‘approved’ ones at the time. It was one of our first home ed projects. I did it in an attempt to get her to broaden her diet. It did not work! She could make a perfectly balanced meal for Billy and her dolls but still insist on eating nothing but pepperoni pizza.

Back then it was much worse than it is now. When she was younger, she would eat only one thing…morning, noon, and night. I remember the time when she went through carton after carton, about three tubs a day…of Philadelphia cream cheese. We were going to Great Ormond Street for 24-hour telemetry with her epilepsy. The nurses thought she was on the special Ketogenic diet that has worked miracles in children with epilepsy. But, no, that was just the ONLY thing she was eating at that time.

Now at least, she will eat two, three, sometimes even four or more different things from her slightly larger approved list…in the SAME day even.

Thank you so much to @GoodMythicalMyth for actually getting PanKwake to try new foods. Even sushi! She did not like the sushi but she loves the little packets of soya sauce that comes with it. Oh…and we actually did the Will It Taco one…Nutella tacos by the way. Oh…and cheese does ice cream sandwich but the peanut butter was too slippery to hang onto.

But PanKwake is still far from a ‘normal’ diet. There is still a PanKwake Approved list of foods. And we try our best with a larger pantry and a deep freeze in the basement to keep some of ALL of them on hand. Just in case.

In case of nights like that one. When she suddenly HAS TO HAVE one food that she has not eaten in months.

And she does HAVE TO HAVE it too. She often won’t eat anything else. If taking a taxi around Swansea at 1 a.m. looking for bagels seem strange, that is NOTHING compared to walking the streets of north London at 3 a.m., pushing her Maclaren buggy, and looking for a store still open that has…??? At least this time, I knew she was safe and warm at home on her iPad with Cookie Monster in the next room.

What happens if she does not get what she wants?

Meltdowns usually. Not temper tantrums…but a meltdown. She honestly believes that she will starve to death if she does not get that one thing.

I know some people would try to ‘break’ her of it. But I never like anything to do with #autism and children that includes that word. I would much rather BREAK the adults when I see it.

Oh, there are times when logic does prevail. I remember the first time I explained that Dominos was not open at 3:30 a.m. She asked for something else but demanded I get it for her as soon as she woke up. And you bet I did too.

Honestly, the other night MIGHT have been one of those. She was incredibly calm and logical when she asked. She even asked for salt & vinegar crisips/chips until I came back from the store…so she would not starve. So when I got to Tesco and discovered empty shelves…and the guy could not find any in the back either…I MIGHT have been able to go home…explain…and promise them as soon as the local shops opened up.

BUT that was a risk. If she had melted down, it would have meant a rougher night for all three of us. And in all likelihood I would have ended up going out for them afterwards anyway.

So knowing she was warm, safe, and relatively happy with Cookie Monster…off we went in the taxi across town to the all night Asda. At first, I was afraid they were out too. Then I noticed one bag of the store brand…that was split at the top…at the very back. Where I come from we have a saying…

So I bought it…and another package of light cream cheese…which was all they had. And away we went.

That is why the taxi driver shook his head and said…the most expensive bagels he had ever seen.

Oh, I can’t write a blog about PanKwake’s eating patterns without mentioning her McDonalds burgers. I kept this photo stored on my phone for the longest time. Just so I could show them how to make her cheese burgers… 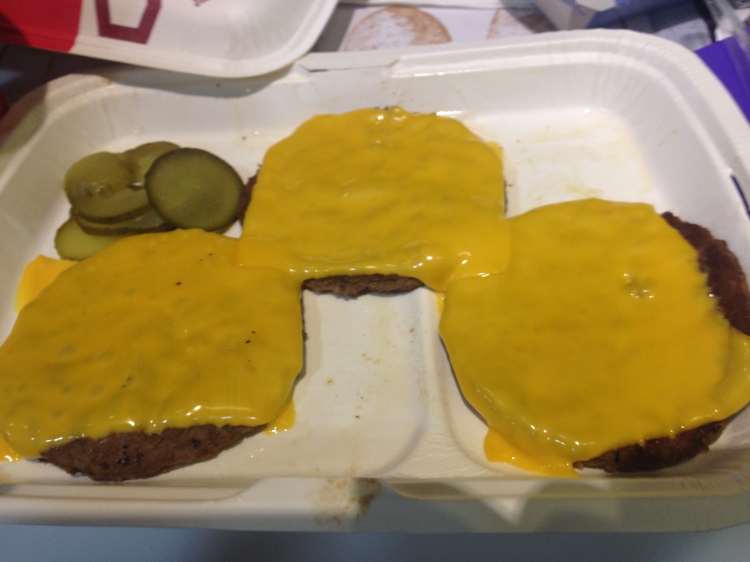 Did I mention that even then…she only eats the cheese and pickles? Yep, the meat goes to friend’s dogs or worse yet…we feel the need to consume it so that it won’t go to waste.

Until the next thing that I have forgotten to stock up on!

But to be fair…twice in fifteen months we have lived here…is NOT nearly as bad as it once was.

One thought on “Most Expensive Bagels!”